A variable frequency drive (VFD)[1] controls the speed of an AC induction motor by controlling the power, both voltage and frequency, that supplies the motor. By reducing the motor speed to match the needs of the application, VFDs have the potential to significantly save energy and reduce operating costs for a variety of motor driven applications.[2] Motor systems that should be evaluated for energy savings through the use of VFDs include:

The potential energy savings from reducing motor power to manage its speed are approximated by the Affinity Laws.[3] These engineering laws are used to express the relationship between flow, head, and consumed power and shaft speed for pump and fan applications. It can be summarized as follows:

To illustrate the relationship between motor speed and consumed power, assume a 50 hp centrifugal pump—95 percent efficiency, operating 4,067 hours per year with a 75 percent load factor, and electric costs at $.07 per kWh—is using a throttling valve to regulate flow to 70 percent on average. Applying the third affinity law, the yearly electricity cost of the motor running at fully rated 100 percent shaft speed or flow would be:

The same system is represented below, except with a variable-speed drive at 97 percent efficiency replacing the throttling valve to achieve the same flow regulation by varying the motor rotational speed.

[1] Variable Frequency Drives (VFD) are sometimes referred to as: Adjustable Speed Drives (ASD) or Variable Speed Drives (VSD).† ASD and VSD are broader categorizations that include mechanical, electromechanical, hydraulic, and VFD controls.† VFDs uniquely control the frequency of the electrical power supplied to a motor.

[2] Actual savings depend on the application. When used in constant speed, high torque, sequencing, and soft start applications, energy costs may not change or may actually be higher with a VFD.

[3] Affinity Laws express an ideal relationship and do not take into account energy losses in the motor system. See also this description. 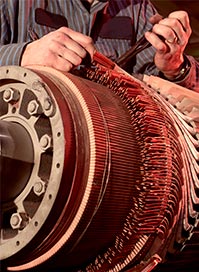