CEE surveys households annually to track the value accruing to the ENERGY STAR® label and demonstrate the success of local promotion of the ENERGY STAR brand. Resulting insight and trendlines are critical to maintaining federal government and state regulatory support for the label, and in turn continuing to make the label available as a tool benefiting efficiency programs. Fielded to the top 57 Nielsen Designated Market areas, the survey collects data on label recognition, understanding of the label's meaning, emotional connection, purchasing influence, product satisfaction, and loyalty. 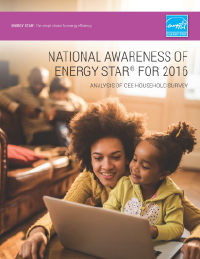 The survey dives into details and emerging aspects of ENERGY STAR.

The data are analyzed by ENERGY STAR, and results from the National Awareness of ENERGY STAR® for 2016 are now available. Over time, consistent adherence to the brand tenets by EPA and DOE, along with long-term brand promotion by CEE members and trade allies, has paid off.

More households in 2016, 85 percent compared with 83 percent in 2015, have seen or heard of the ENERGY STAR label without visual aid. This awareness has risen steadily over the years, and a level of recognition this high makes ENERGY STAR one of the valuable brands in US markets.

Knowingly purchased an ENERGY STAR product in the past 12 months

Program administrators are important stakeholders in ENERGY STAR because they promote efficiency in almost all ENERGY STAR product categories to help achieve reductions in energy use and greenhouse gases at the local level. Likewise, through local promotion of the brand, efficiency programs have helped the brand equity of ENERGY STAR grow.