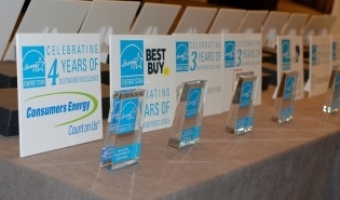 CEE congratulates 2019 winners of the ENERGY STAR® Awards. Since 2001, ENERGY STAR has hosted an annual awards ceremony acknowledging utilities, energy efficiency organizations, manufacturers, retailers, and other organizations that have provided outstanding contributions to public health and the environment via ENERGY STAR products, equipment, and programs. The winners, ENERGY STAR Partners of the Year, are honored for demonstrating national leadership in cost-saving energy efficient solutions.

The awardees’ work leverages and strengthens the value provided by the EPA ENERGY STAR program, which has been the consumer-facing brand for saving energy and protecting the environment for more than 25 years. In 2017, ENERGY STAR certified products, homes, buildings, and plants helped Americans save over $30 billion in energy costs and approximately 370 billion kilowatt-hours of electricity while achieving broad emissions reductions. Together, since 1992, ENERGY STAR and its partners have helped save American families and businesses over $450 billion and nearly 4 trillion kWh of electricity —all through voluntary action.

The 2019 winners include 24 CEE member organizations, a majority of the efficiency program administrators honored; their achievements in superior energy efficiency have helped to create jobs, save money, and prevent greenhouse gas emissions. 20 CEE members received the ENERGY STAR Partner of the Year Award for Sustained Excellence in Energy Efficiency Program Delivery, a category that recognizes both current and past efforts. Three more members were honored as Partners of the Year for Energy Efficiency Program Delivery. One more CEE member was honored with the Excellence Award for ENERGY STAR Promotion.